11 Psychedelic Plants You Can Grow But Not Eat! 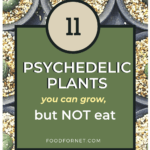 Psychedelic, psychoactive, hallucinogenic… whatever you want to call them, we seem to have a hardwired impulse to seek out plants and substances that alter our perception in some way. With such a large number of plants out there that can have this effect, it shouldn’t be too surprising that some of these plants are actually legal.

In some cases, that legality might be because the plant isn’t thought to be significant enough to warrant an inclusion in the law, but in other cases it might simply be that a law change hasn’t occurred yet. Whatever the reason, these 11 plants (and probably more that didn’t make the list) are legal to grow.

However, that doesn’t mean you can eat them.

In many cases it is legal to grow the plant, but it is still illegal to consume it or to extract the psychedelic components. In other cases, consuming the plant might be technically legal, but generally isn’t a good idea, often for health reasons.

This is a climbing vine that has heart shaped leaves and produces flowers that are white and in the shape of trumpets.

The psychoactive component of the plant is in the furry seeds that grow inside seed pods. These seeds contain the compound LSA, which is a close analogue to LSD. In the United States it is illegal to extract compounds from the seeds.

Ayahuasca is a little bit confusing, because the name refers to the species and to a psychoactive brew that is produced from the ayahuasca vine and some other plant ingredients.

The species itself is a jungle vine from South America, which is particularly common in the Amazon rainforest. While the plant is not specifically regulated in the United States, using it in a psychedelic manner is inadvisable.

This species is also sometimes known as bitter grass or dog grass. It naturally grows in some parts of Costa Rica and in the Mexican highlands. The herb has been traditionally used by Chontal Indians in the region for its psychoactive properties, although this effect is more subtle than many other herbs.

The plant is not controlled at the national level in the United States, although some individual states have considered laws that limit the use of this plant.

This plant is particularly appealing for its ornamental properties, as the flowers are eye catching and quite beautiful. It is a vine plant that grows fast and produces a large number of flowers.

The appearance of the plant is such that most people are probably unaware of its psychedelic impacts. With this species, it is the seeds that are psychoactive and the effect can be similar to LSD. However, achieving that effect involves taking a large amount of seeds, often in the hundreds. Typically commercially available seeds will be treated with some form of pesticide, which makes consuming them particularly unsafe.

Wormwood is a common ornamental plant in the north of the United States and in Canada. The plant is actually used as an ingredient in absinthe (a spirit) and also is used as a flavoring in some wines and spirits.

The plant is also though to offer medicinal benefits and is sometimes used in that way. The psychoactive component of the plant comes from the chemical thujone and people sometimes choose to smoke the leaves in an attempt to get a high in that way. However, the impact tends to be relatively mild.

Kava is a relatively good looking ornamental plant, but its fame largely comes from the properties of its roots. Specifically, kava roots are used in many Pacific cultures to produce a drink that has both anesthetic and sedative properties.

As such, it acts as a relaxant and may play a role in helping to ease anxiety. At high doses, the plant roots are associated with psychedelic effects, although there is also the potential for health risks at higher doses of the roots.

This member of the sage family has been associated with visions and hallucinatory experiences. The plant tends to have large leaves and produces relatively few flowers.

Within the United States, the plant is federally controlled. However, some states have their own laws surrounding the use of the plant. There has also been increasing interest and concern about the use of this plant.

This species of cactus is native to Peru and is a fast growing plant. The plant is sometimes used as an ornamental option, and is sometimes confused with the San Pedro cactus, which has a similar appearance.

The Peruvian torch cactus contains a number of psychoactive alkaloids, with the most common being mescaline. The laws surrounding this species in the United States are not clear, however, the compound mescaline is controlled.

The fly agaric mushroom has a pretty distinctive appearance and is widely recognized. The mushroom is officially classified as poisonous, although the amount of deaths from the species have been relatively few. The species has also been associated with a hallucinogenic effect, as the result of the compound muscimol.

Peyote is a particularly well-known psychoactive plant and this effect is largely the result of the compound mescaline.

Peyote has strong cultural significance for Native Americans and is sometimes used for its psychoactive properties and sometimes for potential curative properties. The use of peyote is generally illegal in the United States, although there are some exceptions for members of the Native American Church and for religious ceremonies.

The drug opium is produced from dried latex that comes from the opium poppy. Because of this, poppies are frequently grown specifically for the production of opium, often in large fields.

Opium is heavily regulated and is often used as a precursor to other modern drugs. However, the flowers of the species are pretty and popular, which makes them common choices for gardens.

Not even joking. It's also called “magic honey” or “mad honey”. It's properties come from the fact that the bees pollenate psychoactive flowers. Learn more about the people and how they collect/use the honey.