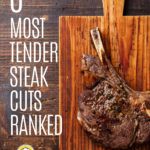 Personally, I love steak. Even chewy, tough, cheap steak. My wife, however, can't stand anything but the most tender, flavorful steaks. So I wanted to so some research to find the most tender cuts of steak out there!

How To Make Rock Candy
Next Post:7 Beer of the Month Clubs That Ship To Australia