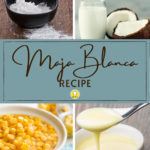 Maja Blanca A quick and simple delicacy that will surely win everyone's vote. Perfect for your next potluck party. 1 400ml-Can Coconut Milk1 354ml-Can Evaporated Milk1 300ml-Can Condensed Milk3/4 Cup Fresh Milk3/4 Cup Cornstarch1 Cup Sweet Corn Kernels1 Tablespoons Coconut Oil Combine the coconut milk, evaporated milk, and condensed milk in a pot. Simmer for 5 minutes.Dissolve the cornstarch in fresh milk in a separate bowl.Add the corn into the pot.Whisk in the cornstarch slurry into the pot and heat until the mixture thickens.Brush sides and bottom of a deep baking dish with coconut oil.Pour the maja blanca into…
Maja Blanca
Maja Blanca
Food For Net
The depth of flavor and delicately smooth texture of this delicacy is unbelievable. It's simply melt-in-your-mouth redefined.

The depth of flavor and delicately smooth texture of this delicacy is unbelievable. It's simply melt-in-your-mouth redefined.

Literally translating to “white delicacy”, Maja Blanca is a dish of Spanish origin that has become a very popular Filipino dessert, present at almost any festivity. It basically is a coconut milk pudding thickened with a cornstarch slurry or with agar powder. Though more commonly prepared with the mere addition of sweet corn kernels and sugar, several variants such as that with purple yam or squash puree, can also be had.

Compared to a panna cotta most of the time, texture would be the only similarity that these two delicacies share. The use of coconut milk gives the maja blanca a subtle yet very distinct depth of flavor.

We'll be adding more complexity into this recipe by actually using four types of milk.

Start by combining the coconut milk, evaporated milk, and condensed milk in a pot and simmer the mixture for about 5 minutes. Whisk constantly to keep anything from burning.

Add about a cup(or more) of sweet corn kernels into the mixture and give it another minute or two to soften a bit.

Dissolve the cornstarch in an equal amount of fresh milk, and whisk the slurry into the pot.

It wouldn't take long before the mixture thickens and should be taken off the heat. Unlike flour, cornstarch thickens quickly yet loses its binding property with extended exposure to heat.

Gelatin could also be used to stabilize this milk mixture instead of cornstarch at the expense of losing that sheen which is characteristic to a maja blanca.

Most recipes you'll find would call for the addition of extra sugar. I prefer my desserts on the less-sweet side and find the condensed milk to give just enough of the sweetness that I like.

Meanwhile, take a deep baking dish and brush its sides and bottom with some coconut oil. This would add more coconut flavor while serving as a release agent, making unmolding the maja blanca a whole lot easier in the end.

While still hot, pour the contents of your pot into the prepared baking dish. Leaving the maja blanca mixture for too long in there would cause it to cool and set right inside your pot.

Leave the maja blanca for a while on the kitchen counter. When it has come to room temperature, transfer it into the fridge and give it another hour or two to fully set.

Finally, invert the baking dish onto a serving platter to unmold your maja blanca. Cut it into serving portions and top with toasted coconut shavings.

More traditionally, this delicacy would be topped with browned coconut milk curds locally called “latik”. To prepare “latik”, simply pour coconut milk into a pan, and set it over low heat. The coconut milk solids should separate from the fats after a while, which you'll see as curds suspended in naturally-rendered coconut oil inside the pan. Start stirring the curds around with a spatula, allowing them to evenly brown in their own oil without burning.