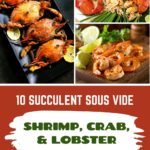 Sous vide is a powerful tool for many different recipes – including seafood. Yet, if you look at sous vide seafood recipes, you’ll notice that most of them are for fish. Sous vide does produce some fantastic fish dishes, including many that are much better than conventional cooking. But, if we focus entirely on fish, we miss some of the other options for sous vide, including shrimp.

In this post, we’re considering sous vide recipes for shrimp and for prawns, along with some related variations, such as crab and lobster. These recipes are all great ways to showcase the flexibility of sous vide for cooking seafood. Plus, the recipes themselves are all worth trying – especially if you’re a seafood fanatic.

Before you get started cooking, make sure you have the best immersion circulator available for accurate, reliable cooking.

These Cocktail Prawns with Orange-Caper Sabayon are one of my favorite ways to prepare prawns – partly because they look so impressive but aren’t that difficult to make. The prawns themselves are cooked in sous vide for about 30 minutes, which lets you get their texture exactly right, without the risk of overcooking them. The orange-caper sabayon isn’t as complicated as it sounds either – making the whole dish easy to put together.

Besides, the finished product does look very sophisticated. I can easily imagine these as entrees at a dinner party or even just nibbles.

This Sous Vide Shrimp Salad comes from amazingfoodmadeeasy.com and it is an easy way to highlight the flavor and texture of sous vide shrimp. I particularly love the colors of the finished dish and the flavors would also come together nicely. The combination of ingredients here is also unusual, which is another reason to try out the recipe. Personally, I imagine it would be perfect in the summer because of how fresh the flavors are.

These Soft Shell Sous Vide Crab Po’Boys are certainly unique and you don’t often see an entire crab in a sandwich. But, the underlying idea does actually work well, especially as the recipe relies on soft shell crabs. Even though I don’t often eat crabs, I did love the way these rolls ended up – especially as they look so stunning visually.

These Maine-Style Lobster Rolls from seriouseats.com have some similarities to my crab po’boys from above, mostly in the general concept. But, there are also some major differences and the seafood in this case is lobster, rather than crab.

Preparing the recipe does involve making sous vide lobster first, although doing so is fairly easy and Serious Eats links to their recipe for making the lobster. For that matter, cooking lobster in the sous vide is a powerful technique on its own and is much easier to get right than traditional alternatives.

This is another recipe that comes from amazingfoodmadeeasy.com and the Shrimp and Chile Queso Recipe also has a Mexican theme. Unlike some of the other recipes, this one uses sous vide shrimp as an ingredient, rather than as the star of the dish. That idea works well, especially as shrimp does impart an appealing flavor to any meal.

I particularly love this recipe for something a little unusual. After all, queso can often end up fairly similar each time you prepare it but this version is simply different, making it a fun choice.

This Sous Vide Dungeness Crab recipe from www.chefsteps.com is a simple one – it’s basically just instructions for cooking crabs in sous vide. But, having a recipe for doing so is powerful, especially as this is a foolproof way to prepare crab. Plus, you can always use the cooked crab in another recipe if you want to.

If you want an impressive sous vide recipe, then this Surf and Turf Sandwich from iamafoodblog.com is one to seriously consider. Now, this isn’t your traditional surf and turf, not by any means. The sandwich itself is very elaborate, using steak and lobster as star ingredients. These are both cooked in the sous vide, which helps to make the whole process a little simpler.

The sandwich is too much work (and would be too expensive!) for everyday consumption. Still, if you’re wanting something unusual or especially impressive – it’s a fun recipe to try.

Like many of the recipes from seriouseats.com, these shrimp are fairly easy to prepare and offer a powerful combination of flavors. What’s more, the recipe provides information about the different cooking temperatures that you can use and the implications these have on the finished shrimp. That information lets you tweak how you prepare the shrimp to ensure they end up exactly how you like them.

Shrimp cocktail is one of the classic options for eating shrimp and isn’t hard to make. But, this Sous Vide Shrimp Cocktail from amazingfoodmadeeasy.com is a different version that you may want to try out. The recipe itself produces perfectly cooked and juicy shrimp along with a cocktail sauce that complements them well. And, if you’re a fan of shrimp, you really don’t need more than that.

This is a fairly basic recipe for Sous Vide Lobster Tail and it comes from stefangourmet.com. In particular, the recipe is simply information about cooking temperature and time, rather than the various flavors and spices that many other recipes offer.

The main reason for including this on the list is that the proposed approaches are different than what most other sites suggest. For that matter, Stefan argues against the perspectives of Thomas Keller, who is considered a leading expert on sous vide. With that in mind, the recipe is an interesting and offers a different way to lobster tails in the sous vide.