18 Keto Lemon Smoothie Recipes That Are Refreshing And Taste Perfect 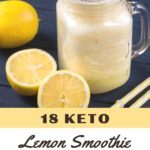 Smoothie recipes often rely on strong flavors to make the shake taste fantastic. Blueberry, chocolate and raspberry are all key examples. I’m sure you can think of plenty of other variations as well.

In this list, we’re focusing on a different angle – keto lemon smoothie recipes.

These recipes all use lemon in some form or another. In many cases, lemon is the main flavor, giving you a smoothie that is refreshing and somewhat tart. The style is a nice alternative to smoothies that end up being a bit too sweet.

Other recipes use lemon as just one of the flavors. When this happens, the lemon helps to complement or enhance the flavors from other ingredients.

PS. If you want to try a different style of smoothie, what about green smoothies? These tend to rely on veggies rather than fruit and include a large range of nutrients.

PPS. The flavor of lemon also works well in lemon fat bomb recipes. Fat bombs work well as ways to boost your fat intake or to get a little extra energy while you’re on the go.

This first recipe features raspberries and avocado as the main ingredients. You’ll taste the raspberries the most, as these tend to have a strong flavor. You can also swap the raspberries out for any other type of low carb berry if you want to.

The lemon seems to complement these flavors nicely. The finished smoothie includes just four grams of net carbs and can be found at lowcarbyum.com.

This smoothie comes from ketozone.com. As the name suggests, the smoothie relies on citrus. As such it takes advantage of lemon, lime and orange flavors.

The orange is in the form of orange zest, so you don’t need to stress about carbs from the orange. The smoothie has been well-designed, as it only contains four net grams of carbs, even with the use of multiple fruits.

It is also a high fat smoothie, with almost 50 grams of fat per serving.

The combination of ingredients makes this a particularly interesting smoothie. For one thing, the recipe involves a hidden vegetable. Tessa provides a few different options about what this can be.

Regardless of the vegetable chosen, the approach can help add nutrition to the smoothie, along with some extra creaminess. Lemon remains the main flavor and stands out from the other ingredients.

You can find the smoothie recipe at tessadomesticdiva.com. One aspect to mention is the sweetener. The recipe suggests using a banana or a low carb sweetener. Anyone on a low carb diet will need to use the sweetener approach. A banana will simply be too high in carbs.

The flavor of blueberries dominates this smoothie, while the lemon juice acts as a nice addition. It’s a simple recipe to make, with just five distinct ingredients.

The smoothie is a fantastic one for keeping you full, with almost 40 grams of fat per serving and close to 28 grams of protein. The carb content is a little under eight grams of net carbs per serving.

This is higher than some other recipes but is still completely viable under a keto diet. You can find the details at mealgarden.com.

This smoothie recipe comes from Jordan at reallifeofpie.com. It is basically a green smoothie, which relies on spinach as the leafy green of choice. There is a variety of other ingredients too including some unusual ones like coconut water kefir and cucumber.

The variety of ingredients means that the lemon doesn’t end up being a particularly strong flavor, but that’s okay. It’s still going to combine well with the rest of the smoothie.

This smoothie is designed to taste like a lemon cheesecake. It uses a perfect combination of ingredients to pull off this goal, including cream cheese and mascarpone cheese.

Each serving of the smoothie contains just 2.7 net grams of carbs and you make two servings at a time. This means that you could easily drink both of the servings without compromising your carb intake. Check out the full recipe at ketodietchannel.com for more information.

If you want a less common combination of flavors, check out this recipe from grassfedgirl.com. It uses some interesting ingredients, including golden flax seed, eggs and rhubarb. As a result, you’re getting different nutrients than normal, along with a smoothie that simply tastes great.

The smoothie is also a very low carb choice, with only 3.3 net grams of carbs per serving. You could even use the smoothie as a meal replacement. It contains more than 20 grams of protein in a serving.

While this recipe is simply called a green smoothie, it isn’t your typical green smoothie at all. There are some interesting ingredient choices that help to make the flavor profile more engaging.

The lemon is one example and cilantro is in there as well. This type of ingredient selection does work very well. After all, there are countless green smoothie recipes out there already and many are similar to each other.

It’s always nice to find something a little bit different. If you want to know more, check out the recipe at greenhealthycooking.com.

Unlike every other option on the list, this smoothie gets its lemon flavor from lemon balm, rather than from the fruit. While the style is unexpected, it does still provide you with a fresh lemon taste.

The other flavors are interesting too. You basically end up with a green smoothie that has a more appealing taste than normal. You can check out the full recipe at primaledgehealth.com to see what I mean.

Here’s a particularly tasty smoothie flavor to try. The recipe comes from alldayidreamaboutfood.com and it offers a fantastic combination of raspberries and lemon.

The title suggests that the finished smoothie will end up tasting a lot like raspberry lemonade. It’s easy to see why. The drink would also be a refreshing choice on a summer’s day and a great way to try something a little bit different.

This recipe offers a more complex combination of flavors to try. The base recipe is a matcha smoothie, which acts as a nice alternative to a hot matcha drink. The other ingredients serve to complement the matcha.

Some of them offer extra nutrition  (like spinach), while others are mostly there for flavor (like the lemon and the mint). You can find the recipe at ketofarms.com.

It is also a fantastic fat bomb choice, as the smoothie contains almost 30 grams of fat and only four net grams of carbs.

The title of this smoothie suggests that it is packed full of superfoods, but that idea is a little misleading. Instead, the smoothie mostly focuses on lemon and yogurt. Turmeric is included in the ingredients list too, but just as an optional ingredient.

While the recipe might not be a superfood smoothie, it still creates a healthy and tasty drink. The flavor of the lemon would be particularly strong, while the turmeric (if you choose to include it) would make the drink a little more interesting.

The recipe is hosted at yummyinspirations.net, so you can find the details there.

Here’s a recipe for anyone who loves green smoothies. It comes from the site sugarfreelondoner.com and features a variety of green vegetables. Some of these are common in green smoothies, while others aren’t.

The combination of ingredients means that the finished smoothie should be appealing and much more interesting than regular green smoothies.

This recipe, from triholisticnutrition.com, is another green smoothie choice. It has a smaller selection of ingredients than the previous example and just features a single green ingredient (baby spinach).

Even so, the recipe creates a nutritious smoothie. The small ingredients list should mean that the flavor of the lemon stands out more than normal.

While the nutrition details aren’t provided for this smoothie, it is clearly another keto choice. The smoothie will also showcase the flavor of lemon well, as the only other flavorful ingredient is a little bit of vanilla.

The recipe is also a good choice for nutrition. It contains yogurt and either whey protein or collagen. All of those ingredients can potentially improve your health. You can find full details for the recipe over at mrscriddleskitchen.com.

Here’s another green smoothie that uses lemon juice to make the whole smoothie much more interesting. The recipe is an interesting one too, as it does not use any dark leafy greens.

This decision should make the smoothie taste different than you may be expecting. The difference in ingredients isn’t a bad thing. It’s always nice to have variation in the smoothies that you’re consuming. The recipe itself can be found at kateslyon.com.

This smoothie does rely on leafy greens, with spinach being the vegetable of choice. Avocado and cucumber are also used. These add to the final flavor and the nutritional composition of the recipe.

That’s not all. The smoothie also has some ingredients in common with Bulletproof coffee. The approach may make it easier for you to get into ketosis. If you want to know more, check out the recipe at blog.bulletproof.com.

With this recipe, Christina offers all the flavor that you’d find in a lemon bar, without the work. She does this by carefully choosing the ingredients to create the precise balance of flavor and texture that she’s looking for.

If you check out the recipe at christinaricewellness.com, you might notice that the ingredients selection is a little bit different than normal. Don't worry, the smoothie still tastes fantastic.