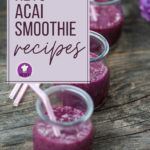 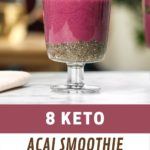 Açaí berries are often considered a superfood. The berries come from Central and South America. They contain a range of powerful plant-based compounds, including an abundance of antioxidants.

The compounds are often linked to anti-aging benefits, weight loss or reducing inflammation. While the health advantages haven’t all been proven, it’s clear that açaí is a fantastic smoothie ingredient. It has a stunning flavor, one that is different than other fruits.

The color is amazing too. It’s true that açaí isn’t the most popular fruit on a keto diet, but there are some keto açaí smoothie recipes that you can try.

PS. You can also try out keto blueberry smoothies. Blueberries contain many important compounds too and are a popular smoothie ingredient.

PPS. While we’re on the topic of fruit in smoothies, you might consider avocado smoothies. Avocados are the most keto-friendly fruit out there. They’re packed full of healthy fats and help to create a creamy smoothie.

This first recipe comes from perfectketo.com. The site is always a fantastic place to find keto recipes.

This particular smoothie happens to look good too – due to the contrast between the purple from the açaí and the almond butter. You’re only getting six net grams of carbs per serving, along with 20 grams of fat and 15 grams of protein. That’s a pretty good balance for a fruit-based smoothie.

I also love the combination of ingredients. None of these are especially unusual, so you could easily find them in local stores.

Some also offer additional health benefits. The inclusion of MCT oil powder or coconut oil is one example of a beneficial ingredient. Both options contain MCTs, which can help with ketosis.

Smoothie bowls are such a wonderful option. They’re often thicker than a conventional smoothie, which allows you to eat them with a spoon.

The bowl style also gives you the chance to include a selection of toppings. Many of these offer health benefits, but would not work well when mixed into a smoothie.

This smoothie bowl recipe comes from ketodietapp.com, which is another famous keto recipe site. The bowl is relatively high in carbs, with 9.6 net grams of carbs per serving.

Still, the fat and the protein content is also high. This means that you could easily use the smoothie bowl as a meal replacement. If you did so, the higher carb content wouldn’t matter so much.

While we’re on the topic of smoothie bowls, here’s another example. This one comes from notafancykitchen.com.

The nutrition details aren’t included, but this version is likely to be lower in carbs than the previous example.

One interesting feature is that the recipe specifies the brands of products to use. You don’t have to follow those recommendations, of course, but different products may change the flavor slightly.

This açaí bowl comes from Caitlin at grassfedgirl.com. The deep purple color is simply amazing and contrasts well against the toppings on the bowl.

This color isn’t just from the açaí powder that is included. Instead, the recipe also uses either blueberries or strawberries.

This recipe contains around 9.7 net grams of carbs per serving if you make it with strawberries (blueberries are higher in carbs). The carb content is pretty high for a keto smoothie recipe, but you could consider the smoothie as a dessert.

Here’s an açaí smoothie that is simpler than most and comes from kristenhewitt.com. It only includes six ingredients. Most of these are common in many different smoothie recipes.

The smoothie is also high in protein, making it a good choice as a meal replacement drink. The one downside is that you will need to calculate the nutritional details for the recipe yourself. Kristen doesn’t include this information as part of her recipe.

This recipe, from ketogenicdietmenuplan.com, is another one that you can check out. You’re getting some other flavors too, including almond from the almond butter and almond milk.

The purple color of the smoothie means that it looks fantastic in the glass. It’s certainly a drink that you could serve to guests. The carb content is relatively low too, with just six net grams of carbs per serving.

If you love berries, this could be a great recipe to try. It comes from texasgranolagirl.com. It includes blueberries and strawberries, along with the açaí.

This is possible because the recipe relies on açaí powder, rather than açaí puree. In fact, the carb content ends up being lower than many other recipes, with around eight net grams of carbs per serving.

Just be aware that the nutrition details are for the smoothie itself. Any toppings will add to the total carb content.

This mightn’t be a problem if you’re having the smoothie bowl instead of a meal, just make sure you calculate your nutrient intake accurately.

This final recipe comes from ketogenic.com and it is an especially easy bowl to create. There are only four ingredients included.

The açaí pulp is the only unusual one of these. The rest of the ingredients could be used for many different types of smoothies.

You end up with just 3.5 net grams of carbs per serving. That’s seriously impressive. The low carb content would make it easy to add on whatever toppings you want to.

32 Keto Italian Bread Recipes That Come In A Variety Of Shapes And Styles
Next Post:21 Keto Coconut Smoothie Recipes For All You Coconut Lovers