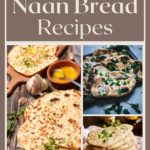 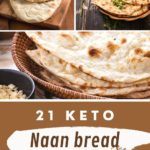 If you’re making any type of curry, naan bread is the obvious side to choose. The bread is perfect for dipping into the sauce and soaking up all of the flavors.

Of course, naan bread works well for many other situations too. The flatness of the bread means that it can easily be used as wraps or as the base for a pizza. You could eat naan bread as a snack too, especially with the right sauce to dip it in.

Another great thing about naan bread is that keto versions aren’t too difficult to make. There are plenty of keto naan bread recipes out there and they are notably different from one another.

Differences can include areas like the low carb flour used, the specific flavors and what other ingredients are added in the mix.

PS. Naan bread doesn’t just go with curries. You could also use the bread as a side for keto chili recipes or keto beef stew.

PPS. We also have a roundup of keto flatbread recipes. This list includes some examples of naan bread, along with other styles of bread.

This first recipe comes from Rachel at aussieketoqueen.com. She mentions that it tastes amazing and is packed full of garlic, but it doesn’t have the same taste and texture as regular naan bread.

The taste and texture issue is true for all of the breads on this list. While some will get close to naan bread made with wheat flour, it’s always best to expect differences.

In this particular case, the naan bread relies largely on coconut flour and psyllium husk. Each serving contains just four net grams of carbs. You’re making four servings with the recipe, so there’s enough naan bread for a family.

This naan bread (from gnom-gnom.com) has one notable feature – yeast. While using yeast does require some extra steps, Paola mentions that this is less complicated than using yeast for sandwich bread or something similar.

The yeast plays a key role in the finished flavor, giving you a much tastier bread than you would have otherwise. This time each naan bread just contains three net grams of carbs, making it very easy to include the bread in your diet.

Here’s a recent naan bread recipe – posted in March 2019. The recipe comes from Aaron at fatforweightloss.com.au. He says that the naan bread is very easy to prepare. You don’t need any special skills or knowledge.

Instead, anyone who knows how to make a pancake can make naan bread too. He also suggests that you can still have takeaway curry on a keto diet if you serve it with homemade naan bread and cauliflower rice.

This next recipe comes from Maya at wholesomeyum.com. It uses almond flour and can be ready to serve within 30 minutes. The cooking time makes this recipe a logical choice for busy weekday evenings when you want to get dinner on the table quickly.

A particularly good thing about this keto bread is the topping. Maya uses a butter, parsley and garlic on top of the naan bread, which would taste simply amazing.

This naan bread has the virtue of being vegan friendly. That also means that there is no dairy present, perfect for anyone decreasing their dairy intake.

Each piece of naan bread only contains 3.5 net grams of carbs, while the recipe is also easy to prepare. In fact, you only need six ingredients to make this naan bread for yourself. You can see all the details at the site sweetashoney.co.

This recipe, from brokefoodies.com, isn’t just for naan bread. You’re actually getting the information to make an entire meal, one that includes naan bread and butter chicken.

The naan bread part of the recipe uses seven easy-to-find ingredients. There isn’t any yeast included this time, so the naan bread is fast to prepare.

There’s one more cool thing about this recipe – you can make the whole thing in less than 30 minutes. That time estimate includes both the naan bread and the butter chicken, which is pretty impressive.

You may notice that this bread is called tortillas and also naan bread. The decision isn’t surprising. Low carb flatbread, tortillas and naan bread are all very similar to one another.

Authors often call a recipe by multiple names, especially as each piece of bread can be used in many different ways. This particular version comes from milnaskitchen.com and relies mostly on coconut flour.

While a full nutrition panel isn’t provided, it is stated that each piece of naan bread contains just two net grams of carbs.

Here’s another coconut flour naan recipe. This one comes from the site ketoconnection.com.au. Each serving of naan bread contains just one net gram of carbs and you’re making eight of them at a time with this recipe.

The garlic butter is a nice touch. It provides an intense buttery burst of garlic. You wouldn’t get the same flavors if garlic were simply included in the naan bread recipe.

Many of the naan breads on this list are similar to one another. This recipe, from sweetcsdesigns.com takes a slightly different approach.

The most unusual ingredient is Greek yogurt. This type of yogurt is sometimes used in keto bread recipes, but not often. The approach should create a different flavor and texture to other types of naan bread.

When introducing this recipe, Ryan (from 9010nutrition.com) mentions that the naan bread doesn’t tear apart in the way that naan bread an Indian restaurant might. Even so, it pairs excellently with curries and tastes good too.

The challenge with tearing is a common one, as keto breads rarely ever behave exactly like their traditional counterparts. Regardless of how the naan tears, the recipe is an appealing one and should be easy to follow.

This recipe, from rushcuttershealth.com.au, is another example that relies on coconut flour. While the recipe is similar to the previous example, there are some distinct differences too.

The most obvious difference is the choice of flavors. The naan bread here uses more traditional flavors, focusing largely on garlic, with a little onion powder included as well.

Speaking of interesting flavors, this recipe from thefoodievibes.com is seriously worth trying out. While the image makes the naan bread look like every other example, this isn’t the case at all.

Instead, there are some interesting flavor ingredients. These mean that the naan bread will pack a punch. You could skip some of the herbs and spices if you want to, but it would be worth trying out the recipe as written at least once.

Andrea, from forestandfauna.com, has a few different names for her recipe, but you do basically end up with naan bread once again. The basic recipe here is what you might expect and uses coconut flour as one of the main ingredients.

There are some optional herbs too. Including these would provide extra flavor, while leaving them out would make the naan bread plainer. The recipe makes seven pitas and each of them contains less than two net grams of carbs each.

This low carb naan bread simply looks stunning. The criss cross patterns make it stand out, as does the round shape. L also mentions that you can cut the bread into triangles and toast them to make keto pita chips.

The recipe can be found at bonappeteach.com. This time you’re making six pieces of naan bread and they contain two net grams of carbs each. The amount is perfect for serving a family.

Antya from queenketo.com offers this small batch naan bread recipe. This time you’re only making four pieces of naan bread at a time. Small batches like this are idea is you’re just cooking for yourself or for two.

Each naan bread just contains 1.8 net grams of carbs, making them an ideal addition to your keto diet. The recipe itself is fairly simple and just uses a handful of ingredients.

The most notable thing about this keto recipe is that you’re baking the naan bread in the oven. The recipe comes from perfectketo.com, so you know that it is going to be a good one.

Some of the ingredients are similar to other recipes, but this version does include golden flax meal as well as a few other interesting ingredients. The main limitation is the carb content.

Each serving of naan bread contains around 8.5 net grams of carbs. While this number of carbs fits within the keto diet, it is higher than most other naan bread recipes.

This is another recipe that you could call a tortilla or naan bread. This particular version comes from Ioana at lowcarbspark.com. I love the way that Ioana has presented the recipe.

Her post contains plenty of great images, along with clear instructions. The recipe is also perfect for feeding guests, as you’re making 12 pieces of naan bread at a time.

I love how this recipe comes from a site called ketoforindia.com. The site name suggests that the authors know what they’re talking about. You should end up with naan bread that is a perfect complement to Indian curries.

The recipe is also a little unusual, as it relies on yogurt, mozzarella cheese and almond flour. While each serving does contain six net grams of carbs, the naan bread is high in protein and in fat.

As a result, the bread should be more satisfying than most other types of naan bread.

If you like the idea of cheese in your naan bread, here’s another recipe to consider. This one comes from Georgina at stepawayfromthecarbs.com.

The naan bread isn’t boring either. Georgina includes a variety of ingredients to make the naan bread taste fantastic. You end up with bread that you could eat alongside a curry or just on its own.

Here’s another stunning naan bread recipe. It comes from Alex at castironketo.com. Don’t get put off by the one hour of prep time that is listed as part of the recipe. This simply refers to the way that the dough needs to be refrigerated for an hour.

The actual process of making the dough and then cooking the naan bread isn’t complicated at all. There’s another advantage to this recipe too – the carb content. Each piece of naan bread contains less than one net gram of carbs.

The garlic flavor is one of the best features of this naan bread. When creating this recipe, Megha focused on making the garlic flavor particularly strong. She provides details of exactly how this was achieved.

You can change the amount of garlic to increase or decrease the overall garlic flavor. You could even skip the garlic entirely if you want to.

Regardless of how you plan to make the bread, you can find the recipe at ketoconnect.net.