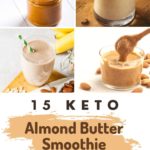 Almond butter is a fantastic ingredient for keto recipes, as long as you're focusing on a version that has no artificial additives. You can even make your own if you want to. For that matter, all types of nut butter have an appealing balance of macros, with plenty of healthy fat and protein.

Almond butter is also a good source of nutrients, while almonds have been linked to various health benefits. The butter is also a perfect choice for smoothies, helping to balance out the flavor and nutrition profile.

To get you started with the ingredient, this list highlights a range of keto almond butter smoothie recipes. Some of these use almond as a key flavor component, while others feature other flavors instead.

There are plenty of options to choose from, so check them out. You can also use the recipes as a starting point and then tweak them to match your own preferences.

PS. If you love the taste of almonds, what about trying chocolate almond fat bombs?

PPS. There are also many keto peanut butter smoothies. You could even replace the peanut butter with almond butter, if you felt like it.

Here's an interesting smoothie recipe to kick the list off. It comes from ketodietapp.com and it relies on maca as a key ingredient. As Martina highlights, maca is an adaptogen that contains many beneficial compounds that have been linked to health benefits.

Of course, maca isn't the only reason to try out the smoothie. There are other appealing ingredients included as well. The combination of flavors also works well, so I'm confident that you will enjoy the smoothie.

This recipe, from ibreatheimhungry.com, is promoted as a breakfast shake and it is easy to see why. The combination of almond and cinnamon makes a great start to the day, while the shake itself is also filling.

One thing to mention is that this is a shake, rather than a smoothie. The main difference is simply the texture. Smoothies tend to be more icy and thicker, while shakes aren't. You can often tweak the ingredients slightly to create the composition that you're looking for. Regardless, shakes and smoothies are both useful choices for a keto diet.

Katya from coolmomlife.com offers this smoothie recipe for you to try. As you might guess from the name, almond butter isn't the main ingredient this time. Instead, the shake is a key way to get plenty of healthy greens into your diet. You're still getting some almond flavor too, especially as the smoothie uses almond butter and almond milk as ingredients.

This chocolate smoothie aims to provide you with plenty of protein and fats. The approach makes the smoothie excellent as a meal replacement. Many of the ingredients are good for you too, like the collagen, avocado and almond butter. You can find the recipe over at ketovale.com, along with links to various other keto recipes.

Acai smoothies can be a little tricky on a keto diet, but this recipe from perfectketo.com pulls off the idea well. The combination of acai and almond butter would taste fantastic and looks good in the image too. Of course, your own smoothie might not be so photogenic, but it is certain to taste just as good.

Honestly, this recipe is worth trying for the acai alone. The ingredient is fairly rare in keto smoothie recipes, but it has an interesting taste and may even offer health benefits. The almond butter is a nice added touch, which would provide you with extra healthy fats.

Despite the name, this recipe from styleblueprint.com doesn't just focus on almond as a flavor. Instead, it contains a combination of ingredients that add to the overall flavor profile, including berries and chocolate. The end result is a more interesting smoothie than you might expect, one that remains easy to make. Of course, you'll need to check out the recipe for yourself to find out all the details.

The flavor combination of chocolate and almond butter might not be as popular as chocolate and peanut butter, but it still tastes fantastic. This rich and creamy choice comes from ieatketo.com. The author includes useful details along with the recipe, such as ways to alter the texture. I particularly love how the recipe ends up looking like a chocolate shake. You could even serve it to people that aren’t on a keto diet. Many wouldn’t even realize that the shake is low in sugar.

This shake follows a similar idea and comes from primaltoad.com. Once again, the smoothie looks extremely good in the image – like something you would buy from a local store. It's easy to see that this would be a deliciously creamy treat, one that still manages to be low carb. The color suggests that the drink would be rich in chocolate flavor.

Vanilla is such a good flavor to combine with almond butter, simply because it isn't overpowering. The approach means that the almond flavor should still remain noticeable in the finished shake. The same isn't true for many other flavor combinations, like shakes that heavily rely on berries or chocolate.

The recipe for this shake comes from tastefulketo.com. It does contain dairy, but Rowen mentions a simple substitution that you can make to create a dairy free version of the drink.

Here's another great shake that you can try out. It relies on the flavors of coconut and chocolate. These work perfectly together and you still get a hint of the almond as well. Lindsay, from cottercrunch.com, also mentions alternatives for some of the ingredients, along with add-ins that can make the shake a little sweeter.

You can check out the video on the site too. This is a simple way to learn everything you need to know in one go. Besides, recipe videos are always fun to watch.

While this is called a chocolate peanut butter shake, Amanda (from theskinnyfork.com) mentions that it can be made with almond butter as well. Either way, you end up with a chocolaty and nutty flavor. The recipe is also a very simple one. You only need four ingredients, which are all simply mixed together. Smoothies like this make good starting points. You can always tweak the recipe once you’re familiar with it by changing the quantities or adding in extra ingredients.

If you love smoothie bowls, this recipe from godairyfree.com could be exactly what you're looking for. It's a dairy free smoothie, one that offers a significant amount of healthy fats and protein. As such, it makes an ideal choice instead of a conventional breakfast. Add on a few interesting toppings and you have something that looks amazing in the bowl too.

You’re not limited to the bowl style either. The biggest difference between a smoothie bowl and a regular smoothie is the texture. You can easily create a smoothie by increasing the amount of water or plant-based milk in the recipe.

This recipe, from healthfulpursuit.com, is a vegan choice that would simply taste amazing. Almond butter is just one of a variety of ingredients, which all contribute to the final flavor. The inclusion of coffee makes the drink perfect for first thing in the morning.

While most smoothies just require adding the ingredients and mixing them all up, this one is a little more complicated. There are two steps to follow. This isn't a bad thing. Most of the work is in the first step. You could easily do this the night before, giving you the ability to finish up the preparation the next day – just in time to give you a smoothie for breakfast.

This is one of the simplest recipes that I've seen on stepawayfromthecarbs.com, but that's not a bad thing. Simple recipes are often very powerful, which really is the case here. The smoothie uses just four ingredients, giving you the full flavor of the almonds and the avocado.

The recipe is also an interesting one. While avocado is a common addition to keto smoothies, it’s normally just used to create a creamy texture. It’s rare to find a recipe like this, where avocado also acts as the main flavor.

Here's a shake that allows the flavor of the almond butter to really shine. This one comes from yurielkaim.com and it also uses avocados to create a thick and creamy drink. The slight green color makes the shake a little more interesting too, especially if you garnish the drink like in the image.

The smoothie has a secret ingredient too, one that provides it with more nutritional power. I’m not going to reveal what that is here, so you’ll need to check the recipe out for yourself.