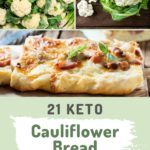 Cauliflower is one of the most popular vegetables on a keto diet. This isn’t so surprising either, as cauliflower is made up of only four percent carbs and is remarkably versatile. Cauliflower also has a texture that’s fairly similar to potatoes, despite the low number of carbs in cauliflower.

There’s another advantage too. Cauliflower is bland. It doesn’t have much flavor at all. This feature means that there is no limit to the range of different recipes that you can make with cauliflower. The taste of your meal will come from the other ingredients, giving you the ability to do whatever you like.

You’ve probably heard about cauliflower rice and perhaps cauliflower pizza bases, but what about keto cauliflower bread recipes? While the idea might seem a little unusual, cauliflower is a useful ingredient in keto bread. Most of the time, you won’t even taste the cauliflower in the finished product.

PS. Zucchini is another popular keto vegetable, so it should come as no surprise that there are plenty of zucchini bread recipes too.

PPS. Cauliflower is featured in other types of keto food too. We even have an entire collection of keto dairy free cauliflower recipes.

This first recipe comes from mincerepublic.com. It provides the information for making cheesy breadsticks, rather than a traditional loaf of bread. Breadsticks like these work well in so many different situations. As the image suggests, the sticks end up being gooey and packed full of cheese. Doesn’t that just sound amazing?

Here’s a different style of keto bread – tortillas. This recipe comes from aspicyperspective.com and you can make the tortillas in just a few minutes. The recipe is incredibly simple.

You just need three main ingredients, along with a small collection of seasonings. Each tortilla contains roughly three net grams of carbs. The low carb content makes it easy to fill the tortillas with any combination of ingredients that you want to.

Brenda from sugarfreemom.com offers another tortilla recipe that you can try. She mentions that no one will even realize that the tortillas are made of cauliflower, which is great if you are feeding kids.

The tortillas are baked in the oven, so you don’t need to worry about flipping them. Doing so makes the entire process that much easier. Brenda does mention that you need to weigh the ingredients. Simply using cups for measurements will not give you accurate results.

Cauliflower Bread With Garlic And Herbs

This recipe comes from wholesomeyum.com and allows you to make a loaf of bread. The inclusion of garlic and herbs means that you’re essentially making garlic bread, which is a seriously delicious idea.

As Maya says, this is a healthy version of garlic bread. It is a fun choice for making sandwiches because the bread contains more flavor than most other bread recipes.

As the name suggests, this cauliflower bread recipe uses coconut flour rather than almond flour. The choice makes the bread an ideal choice for anyone with a nut allergy. Angela, from divaliciousrecipes.com, mentions that you could use almond flour instead.

Just make sure you decrease the number of eggs if you plan to do so. The recipe makes eight slices of bread, each of which contains two net grams of carbs.

This breadstick recipe comes from the site jocooks.com. The breadsticks are extremely popular, with a large number of comments on the site, along with plenty of social media shares.

Joanna mentions that you can use the recipe to make breadsticks or to make a crust for pizza. You can be certain that either approach is going to taste amazing. On a side note, this recipe doesn’t use coconut or almond flour, which is fantastic for people with allergies.

Here’s another recipe for breadsticks. This one comes from lowcarbyum.com. In her post, Lisa also shows that the finished bread doesn’t need to be in the form of breadsticks. You can cut them into whatever shape you like. Using a cookie cutter on the dough is one simple way to do so.

This recipe, from tasty.co, manages to look very similar to regular bread. Appearances can be deceiving, as this is another example of cauliflower bread.

This version relies on almond flour as well as the cauliflower. The almond flour plays a key role in the finished texture. Various other ingredients are included too, including some that add to the overall flavor profile.

If you love the idea of white bread, this recipe from themerrymakersisters.com could be the perfect one for you. The recipe is a relatively simple one, using just six ingredients.

While the recipe does use almond meal, you can swap this for half as much coconut flour to create a nut free version of the bread.

Here’s another recipe to try out. It comes from the site thermofoodieandthechef.com and relies on either almond meal or almond flour. Each serving of the bread contains just 3.2 grams of carbs. Even more impressively, there are roughly 20 grams of fat per serving.

As such, the bread ends up being a tasty source of healthy fats. Michelle also includes information for variations on the recipe, such as egg free or dairy free cauliflower bread.

It’s hard to go wrong with a recipe like this one, which comes from realhousemoms.com. The cheesy breadsticks look just as good as breadsticks made with wheat flour, but the cauliflower version is much healthier.

The recipe takes advantage of herbs, cheese and garlic to create a snack that should be very popular.

While we’re on the topic of breadsticks, this recipe from twosleevers.com offers another version to consider. The biggest difference is that this recipe creates breadsticks that are crispy, rather than gooey. The breadsticks are still packed with flavor, especially as a selection of seasonings is used.

This flat cauliflower bread recipe comes from the site everylastbite.com. It makes a great intermediate between breadsticks and a regular loaf of bread.

Carmen mentions that the bread has a moist and light texture, while the cauliflower isn’t noticeable at all. The recipe is also very easy to prepare. You just need a bowl and a baking sheet. You don’t even have to knead the dough.

The site perfectketo.com offers many amazing recipes, like this version of cauliflower bread. Despite the small size, this bread looks fairly similar to other types of recipes, which is an appealing feature.

The recipe also includes various optional ingredients. These help to provide extra flavor. That taste is perfect regardless of whether you’re eating the bread on its own or using it to make sandwiches (or something similar).

Kirbie from kirbiecravings.com provides this version of cauliflower bread. It looks very much like a conventional loaf of bread and is also very popular. Kirbie mentioned that her goal with this recipe was to create a loaf of bread that could be used just like regular bread. This includes being able to slice it easily, use it to make sandwiches and even toast the bread.

While it took Kirbie two years of testing to develop the recipe, it’s clear that the process was worth the effort. The bread itself tends to be relatively airy, similar to cloud bread. It becomes studier when toasted and tastes fantastic either way.

Here’s a different type of cauliflower bread to try out – cauliflower buns. This recipe uses turmeric as a little something extra. This provides a unique flavor and some interesting health benefits.

The buns are also easy to make. They use just four ingredients, which are all common in keto kitchens. The recipe itself comes from the site cleaneatingkitchen.com and Carrie includes plenty of images to step you through the process of making your cauliflower buns.

Megan from madcreations.com offers another version of cauliflower buns that you can try. The best thing about these is that they contain cheese and bacon. This ingredient combination would make the buns amazing if you were making hamburgers. You could even just put toppings on the buns to create mini pizzas.

There are many similarities between this cauliflower bread recipe and previous examples, including the use of almond flour and eggs. The biggest difference is the topping. Lauren (from fearlessketo.com) relies on various seeds in her photographed version. She also provides a list of topping suggestions. You could choose between any of these or even use multiple toppings.

This recipe from bulletproof.com doesn’t just tell you how to make cauliflower bread. Details about the toppings are provided as well – giving you the chance to make an entire meal in one go.

I love the idea of combining bacon, eggs and avocado with cauliflower bread. The flavors would work together so well. The bread looks amazing when served too.

According to Louise, this recipe is for cauliflower naan bread. This type of bread works well with Indian food and can often be used like a tortilla too. That’s not even the most interesting part.

This recipe is notable because it is free from nuts and eggs. It also ends up being AIP and paleo compliant, which isn’t a common outcome. The style means that naan bread would suit many diets. You can find the details at healingautoimmune.com.

This recipe, from blog.paleohacks.com, is another option for paleo dieters. The inclusion of garlic as an ingredient makes the bread especially appealing. Jennafer mentions that the bread is amazing with sliced tomatoes on top.

Like many of the recipes on this list, the cauliflower bread contains a decent amount of protein and fiber. Those aspects should make the bread especially filling.

34 Keto Shrimp Recipes That Will Make Your Taste Buds Tingle
Next Post:8 Keto Monkey Bread Recipes For A Fun Sweet Treat To Eat