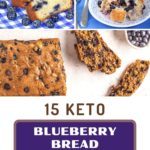 The keto diet aims to dramatically cut down carb intake, which might make blueberry bread seem like an odd choice. That’s not really the case. Blueberries are one of the best keto fruits, as they are relatively low in sugar and taste wonderful too. They also work exceptionally well in bread, providing a burst of flavor.

Blueberry bread has other advantages too. The approach bypasses some of the frustrating aspects about keto bread, creating a fantastic balance of texture and flavor.

The recipes in this list are all examples of blueberry bread. They have different combinations of ingredients, so each recipe is unique and powerful. Check them out in the list below.

PS. Zucchini is another interesting ingredient that you can find in keto bread. We’ve featured many of these in our list of zucchini bread recipes.

PPS. You’ll find blueberries featured in other keto recipes too, like blueberry smoothies.

This recipe comes from realbalanced.com and it features lemon as an additional ingredient. Lemon and blueberry are both fresh flavors, which contrast one another well.

As Sara mentions, the finished bread ends up being tart and tasty. It ends up tasting like the most gorgeous dessert, yet it only contains around five net grams of carbs per serving.

I’ve always loved the recipes from gnom-gnom.com and these bagels are one example of the amazing foods that you can make. The bagel style is a fun alternative to regular bread too.

You could easily use individual bagels for breakfast or as a snack on the run. Paola mentions that the recipe is carefully designed, so you don’t end up with bagels that taste cheesy or eggy. In other words, these are just as good as any non-keto bagel that you’ll find out there.

Blueberries feature in a surprising number of keto bread recipes – and seem to work well. This recipe includes blueberries and lemon juice. The combination creates a perfect balance of sweet and sour, leading to a dessert-like bread that tastes simply amazing.

Kasey also mentions that you don’t need much baking experience to make the bread. Even a beginner can do it. You’ll find all the details at kaseytrenum.com.

Here’s an interesting recipe style to try out. The bread comes from the site sugarfreemom.com and is somewhat similar to an English muffin. Brenda mentions that it’s worth toasting the bread before you eat it, as this creates the exact texture that you’re looking for.

The bread just contains three grams of carbs per serving, along with five grams of protein. The combination of macronutrients makes the recipe an especially good breakfast choice.

I love this recipe from Maya at wholesomeyum.com. It is a combination of two styles – zucchini bread and blueberry bread. Both ingredient choices add moisture into the recipe, while creating some interesting flavors.

The addition of icing makes the bread stand out even more. This is a recipe that you could easily serve at a party, perhaps as a dessert or as a snack.

This recipe, from lowcarbspark.com, is simply blueberry bread. Nothing more, nothing less. One interesting feature is that Ioana uses a combination of almond flour and coconut flour when making the bread, rather than one or the other.

While the loaf of bread in the image doesn’t include any icing, Ioana does provide brief instructions for a simple lemon glaze that you can make if you feel like it.

The most notable thing about this recipe is that it is so easy. It can simply be made by adding the various ingredients to a blender, moving the mixture into a pan and then baking it.

How is that for simple? You don’t need a large number of ingredients either. The recipe makes 16 servings, so you’ll have plenty of blueberry bread to go around. You can find the full recipe and all other information at elanaspantry.com.

Here’s another recipe that combines the flavors of blueberries and lemon. The style is a little different than normal, as the blueberries end up at the bottom of the bread, rather than dispersed throughout it.

This is a recipe that relies on almond flour. The flour choice means that this bread isn’t good for anyone with a nut allergy, but it is perfect for people who don’t like coconut flour. You can find all of the details at moscatomom.com.

This recipe comes from the site lowcarbdietworld.com. As the title suggests, this one relies on almond flour as well. A slightly odd aspect is that the recipe is called blueberry lemon bread on the site.

Despite this, lemon isn’t included anywhere in the recipe. The end result is that this ends up simply being a blueberry bread recipe. That’s not a bad thing, especially as the bread just ends up containing around 2.5 net grams of carbs per serving.

Here’s a lemon and blueberry bread recipe that does actually contain both parts. It comes from the site fittoservegroup.com, which offers a selection of interesting recipes for you to try out.

By this point, the combination of blueberries and lemon should be a familiar one. Even so, the recipe is a fantastic one to try out. Hilda even offers more detailed instructions and guidance than most other authors.

This recipe, from messforless.com, ends up having a much more vibrant blueberry color than most others. This is partly because many of the blueberries are somewhat crushed, allowing their juice to leak out.

This style creates a more intense burst of flavor. Having the blueberries only at the base and sides of the bread works well too. This provides an interesting contrast between the lemon and blueberry flavors.

The biggest difference with this blueberry bread recipe is that Jen makes it in a pie dish rather than a loaf pan. The approach creates a circular loaf of bread that you can slice into like a pie. It’s quite a good idea, as blueberry bread tends to be pretty sweet.

Serving it like a pie (or a cake) can truly make the bread seem like dessert. The recipe itself comes from ketointhecity.com. You can also just make it in a loaf pan if you would prefer to.

Bethany from topnotchnutrition.com has an interesting way of serving her blueberry bread. The bread is still made in a similar manner to the other recipes on this list, but she serves it as 25 individual squares.

It’s a clever trick. Serving the bread like this makes it easy for people to stick to portion sizes. The bread squares end up looking like little dessert cakes, so they’re perfect for serving to guests. What’s more, each of the squares just contain 1.4 net grams of carbs.

While this recipe is promoted as a blueberry breakfast cake, it still follows a similar style to the blueberry bread recipes on this list. The recipe comes from Arman at thebigmansworld.com, which is reason enough to try it out.

The cake is also suitable for plenty of diets, including paleo and keto. There is also a vegan version of the cake, which is free from flour and egg. However, the vegan version isn’t keto friendly.

Here’s a more traditional blueberry bread recipe, from the site coffeebreak.life.  This one combines the blueberry flavor with vanilla – a combination that works well. It’s also another recipe that uses both almond flour and coconut flour. As such, it’s only suitable for people who don’t have nut allergies.

8 Keto Monkey Bread Recipes For A Fun Sweet Treat To Eat
Next Post:15 Keto Vanilla Smoothie Recipes That Aren’t Boring At All