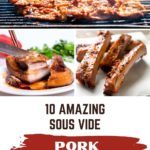 I'm the type of person that consistently overcooks pork. Unless it's a fatty cut of heritage pork, almost 100% of the time it's dry and tough…unless I use sous vide. The biggest advantage of sous vide for me is getting meat temps correct (safe), without overcooking, and these sous vide pork recipes do just that.

There are other arguments for using sous vide as well. For one thing, it is easy, especially once you get used to it. More than that, sous vide lets you create amazing flavors and textures with food, many of which simply wouldn’t work with conventional methods.

All of these recipes in this list are examples of exactly that idea. So, they represent cases where sous vide cooking creates a meal that is simply more flavorful and/or has a much better texture than standard methods. And, many of the recipes are also a breeze to prepare – so much so that you may not go back to regular techniques.

I love pork belly strips as an alternative to bacon and these Mustard and Molasses Pork Belly Strips are an example of just how much you can do with pork belly. The end result is something similar to bacon but it has more substance and works much better as part of a dinner.

The bulk of this recipe is the marinade, which is what offers the wonderful flavors that are present in the final dish. What’s more, that marinade could easily be used in other recipes. I can imagine using it for other sous vide pork recipes or even sous vide chicken breast. After all, the flavor combination does work extremely well.

Speaking of pork belly, here’s another example. This time, the recipe is for Pork Belly Adobo, so you’re using chunks of pork belly, rather than strips. Again, the flavors of the recipe are fairly intense, especially as the pork belly gets a long cook in the sous vide (24 hours or more). The end result is well worth the time.

Even though I love regular pork belly adobo, I found that this method really was better – especially as the chunks of pork ended up extremely tender without losing their structure. It is difficult, if not impossible, to get similar results with traditional approaches.

Pork chops are another cut of meat that works extremely well in the sous vide and these Asian BBQ Pork Chops are an example of that. More than anything, I love the way the flavors with this recipe turned out, especially as the end result is so different than normal. The meat also looks amazing on the plate. Those outcomes make this the perfect dish for guests who like meals that are a little bit unusual.

The flavor profile also worked well enough that I would consider making this dish just for myself.

There can be no doubt that we all love our bacon. There are so many bacon products out there that prove that point – but actual bacon is the best option out of them all. In this case, the recipe is for Bacon with Chili-Bacon-Fat Waffles, so you’re even getting a double hit of the bacon.

As you can probably guess, the sous vide component of the recipes is just for the bacon and not for the waffles. But, this has quickly become my favorite way of preparing bacon and it’s likely to be yours too. The style gives you much more control over how crispy the bacon turns out, which is perfect, as individual preferences do vary.

While we’re on the subject of bacon, what about this Bacon-Wrapped Pork Tenderloin? The dish is a good choice if you’re looking for something more substantial, especially as bacon on its own isn’t going to be enough for dinner.

With this particular recipe, we’re cooking the tenderloin while it is wrapped in the bacon, so it ends up being strongly infused with bacon flavors. The style makes this a pretty easy dish to prepare, regardless of whether you use the mustard jus from the recipe or make your own sauce to accompany the pork.

This Chorizo and Raisin Stuffed Pork Loin is another fun recipe that pairs two types of meat. Once again, we’re cooking the entire thing as one and then making a sauce that goes with it. That style lets you take advantage of all the flavors from the ingredients, along with the convenience of sous vide cooking.

I also love the visual style of this dish and that aspect would make it great for serving up at dinner parties. As with the previous recipe, you could always substitute for another sauce if you don’t like the green olive jus. But, the flavor combination here does work exceptionally well.

I confess that I love most of the recipes I put on this site – mostly because I wouldn’t put them up if I didn’t. But, these Sous Vide Piri-Piri Pork Kabobs are one of my current favorites. One reason is simply that piri-piri is mostly used with chicken, yet I’ve found that the flavors actually work so much better with pork.

The kabobs themselves make use of pork shoulder, partly as a way to showcase the power of sous vide. You could do something similar with other cuts of meat as well, although you would need to adjust the cooking time and temperature. Regardless, the end result is simply perfect and you could use the kabobs as part of many different meals.

To be honest, the advantage of these Masala Pork Ribs is only partly connected to the flavor profile. Instead, I found myself extremely impressed with the final texture of the pork ribs. Simply put, they were juicy and tender, while still holding their shape. This isn’t an outcome you normally see with conventional cooking methods and is a reason I like the sous vide style so much.

With that in mind, you could easily change the spice rub used to take advantage of whatever flavors you enjoy. I provided basic information for doing so in the recipe – and the rest of the instructions remain the same regardless of the flavoring choices. As such, this is a great recipe to play around with, especially if you’re a fan of ribs, like I am.

I mentioned a couple of pork belly recipes earlier and this Sous Vide Chinese Pork Belly is another example. This is another case where the recipe is for slices of pork belly, so you could easily use them in many contexts.

The information in the recipe shows you how to make the pictured sandwiches but you could just as easily use the pork belly slices for something completely different, such as serving them over rice. In many ways, it doesn’t matter how you serve the pork belly because the meat is amazing no matter what.

Bockwursts aren’t entirely pork but this Wasabi-Beer Bockwurst recipe was too good to exclude from this list (besides, they do contain some pork). There are many things that I love about this recipe but my favorite would have to be the flavor profile. Wasabi and beer don’t sound like particularly good flavors for sausages, especially not when combined with a teriyaki onion marmalade. Yet, the combination of ingredients ends up working extremely well.

Besides that, it’s nice to be eating bockwursts that are a little bit different. And, as always, the sous vide approach results in a great dish overall, ensuring that your sausages end up juicy and full of flavor.