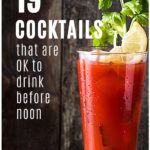 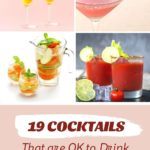 Drinking before noon doesn't have to mean that you are blasted before 12:00PM! Celebrating a raging all nighter on Friday with the hair of the dog can chill you out and make you semi-functional on Saturday. Sounds like a Corpse Reviver No. 2 is what you're looking for.

Still, sometimes there's really no excuse other than you've got nothing to do this weekend except hang out by the beach, so why not start early?

Whatever the occasion, there are unspoken rules to what's socially OK to drink in the early hours of the day! These are generally lighter drinks, accompanied by fruit, coffee, or tea to wake you up and properly hydrate you for the rest of the day.

In my opinion, the only thing better than a traditional American breakfast, is one accompanied by unlimited mimosas. My personal favorite on this list is the greyhound just because I believe in the rehydrating and energizing effect of grapefruit juice in the morning!

Because a greyhound really is just grapefruit juice and gin (typically a 4:1 ratio), it’s easy to see how this drink is a good choice before noon.

After all, it is little more than grapefruit juice spiked with alcohol and grapefruit juice is always a good option for the morning. If you’re making it yourself, you can also alter the ratio of grapefruit to gin to make a drink that is even lighter (or stronger, if that is your thing).

Plus, it just looks like a glass of grapefruit juice, which is always a bonus.

Mimosas are wonderful for the morning. They are light and fruity, with equal amounts orange juice and sparkling wine. They are the perfect thing to wake up to in the morning and they have the bonus of being very socially acceptable.

Indeed, they are served as part of morning brunch on many occasions and are a popular casual drink in general. They also taste fantastic.

As drinks go, a bloody Mary can get pretty complex, especially if a number of spices and garnishes are included. Even though tomatoes are technically a fruit, that doesn’t seem to be the reason that you can safely drink a bloody Mary early in the day.

Perhaps the reason is that the tomato makes the bloody Mary feel like a health drink – even if it does happen to be an alcoholic one.

Without a doubt, the melon patch is one of my favorite choices when it comes to lunchtime or early morning drinks. The cocktail uses vodka along with a melon-flavored liqueur, like Midori.

Triple sec is also often added and the remainder of the drink is club soda. With this drink, the fruitiness comes from the alcohol, so it is best to choose alcohol that meets this goal. For example, a fruit flavored vodka works well with this cocktail.

For an early morning drink, it’s hard to go wrong with a screwdriver. Because the cocktail is simply vodka and orange juice, you can prepare the drink easily.

It is also a good option at home, where you can change up the ratio of vodka to orange juice (traditionally 2:1) to suit your own tastes. Because of the simple nature of the drink, it isn’t one that I would personally choose to order at a bar, but it is fantastic choice for the home.

I love the way that tequila sunrise lives up to its name. This is one drink that looks fantastic and it really does look like you should be drinking it first thing in the morning.

The orange-red at the bottom comes from the grenadine syrup. This part is actually added last, but its weight makes it sink to the bottom. Just try not to drink this one with a straw or you will probably end up with a mouthful of syrup.

I love sparkling drinks in the morning and here is another example. The bellini uses peach nectar or puree along with sparkling wine. Generally speaking, a prosecco wine is preferred, but the drink can be made with any type of white sparkling wine.

There are also variations on the drink that use other fruit flavors, like the Tintoretto, which uses pomegranate juice. Personally, I quite like the traditional bellini and the peach flavor works well in the morning.

Martinis aren’t really morning drinks, but fruit flavored ones are generally an exception.

One of the key tricks with a drink for early in the day is simply to pick ones that look fruity and fun, rather than ones that look like serious drinks. After all, people seem to draw a large line between someone drinking something for its taste and someone who is focused primarily on the alcohol.

With the watermelon martini in the picture, it’s easy to see how the drink would be viewed as part of a casual morning or afternoon and nothing more.

Gunfire can be served at any type of the day simply because it is tea based. The drink is simply a cup of black tea which also contains a shot of rum.

It is consumed warm in the same as black tea. It is another drink where it isn’t even evidence that you are drinking alcohol, which can be an advantage in some company.

In Australia and New Zealand the same name is used for a hot drink made with black coffee and rum. You could really pick either version to drink, depending on whether you prefer coffee or tea.

Like gunfire, Irish coffee is an unnoticeable drink, and it is also a rather sophisticated one. The drink is essentially coffee that includes Irish whisky. Traditionally the drink also uses some fresh cream that is poured on top as a layer.

The coffee is then consumed through the cream. Although the cocktail calls for cream that hasn’t been whipped, it is often made with whipped cream instead, especially as it is easier to make this sit on the top of the drink.

One nice variant is the use of Irish cream as a substitute for the whisky, which produces a creamier drink.

The video above also uses hot chocolate, which would create more of a mocha flavoring. This is a morning cocktail with style, especially as both tequila and expresso have a considerable kick to them.

The strawberry blush is a more obscure option for a cocktail, but it certainly falls under the fruity category, which makes it great as a morning drink.

In particular, it makes use of fresh strawberries, vodka and lemonade, and can be garnished with mint. A cran/straw-berry blush is a slight modification on this, because it uses cranberry juice as well as the strawberry.

This gives it a bit of a shaper taste without as much sweetness. I think that makes it a perfect choice for the morning, because a little sweetness can go a long way.

Karsk is another drink that relies on coffee as its base – after all, coffee is a pretty good way to start the day. This is a stronger drink than the other ones on the list and is meant to be half alcohol and half coffee.

The term is supposed to refer specifically to coffee with moonshine and many people believe that this is the only way to make the drink. However, the term can also be applied to coffee with vodka added instead.

South side cocktails are a very common choice in the summer months. In some ways, the south side is an indication that summer is just beginning and it is a particularly preppy type of drink.

The drink uses gin, mint leaves, sugar syrup and mint leaves. The end result is a vibrant gin cocktail with appealing citrus notes. To me, everything about the cocktail screams summer – and its popularity suggests that I’m not alone.

Unlike most other items on this list, milk punches aren’t fruity and they don’t use coffee.

Despite this, their milky nature and their history makes them a well-accepted choice at any time of day. The basic recipe uses bourbon, rum and milk, along with vanilla extract, simple syrup and grated nutmeg.

However, this is one drink to be a bit careful with. Like many milk-based cocktails, the sweetness of the cocktail can mask the taste of the alcohol, so it is easy to drink too much.

Sangria is a mixed drink that involves red wine, brandy, chopped fruit and some type of sweetener, like honey. Sometimes pop is used instead of the brandy.

It is a versatile drink with many variations. White sangria is one of these variations and it takes advantage of white wine. In a white sangria, the flavors are lighter as white wine is not as intense.

Likewise, the fruit flavor of the cocktail comes through more, making it a suitable option for earlier in the day.

Morning glory fizz is a somewhat complicated cocktail – although it is also an appealing one.

The drink relies heavily on whisky, along with citrus, egg white, sugar, some soda and absinthe. In the video, the absinthe is used as a spray over the completed cocktail, although in other versions of the drink the absinthe is added in as an ingredient.

Either approach leads to a largely white drink that that certainly deserves the name fizz. That fizz nature is also what makes it very suitable for before noon.

Here’s another popular fix and again, this one is perfectly acceptable early in the day. As you might have guessed, the Ramos gin fizz does use gin as its main alcohol.

It also uses egg white, club soda and sugar like the previous fizz. However, there are some differences, like the use of both lemon and lime juice for the citrus (as well as orange flower water) and the addition of heavy cream.

The end result is still a white fizz drink that is perfectly acceptable any time of the day. There are many other fizzes that I haven’t mentioned too and in general these are also very valid before noon.

It involves gin, triple sec, lillet and lemon juice (in equal parts), with a dash of absinthe. The only non-alcoholic component of the drink is the lemon juice, so it is a pretty strong drink.

It does do the job though and it is a good way to take the edge off the next morning – just don’t overdo it.